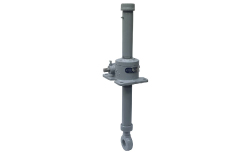 Duff Norton was the originator of the Anode Jack, which was developed in
conjunction with the Aluminium Industry. Anode jacks were used in the
first commercial aluminium making plant in the United States and
continue to be used in aluminium plants throughout the world.

Anode Screw Jacks provide the accepted method for the lowering, precise positioning of the anodes and anode beams in the vast majority of aluminium smelters. Anode beam positioning in aluminium smelters employ a special screw jack
called an Anode Jack has evolved from a standard unit modified to cope
with the harsh operating environment. The Anode Screw Jack or sometimes known as Pot Jacks are mechanically linked through a combination of drivetrain components with their position monitored electronically thus providing potline efficiency to be attained.

The alumina smelting process involves high temperatures and loads. The Duff-Norton anode jack is a heavy-duty version of our standard actuator, and has been modified for each smelting facility’s specific application.

These jacks have a large overload capacity to handle the side loading
stresses caused by the thermal expansions and contractions of the
frames. They are also built to take the compressive overloads caused by
occasional highjacking of the frames and frozen pots. The Anode Jack’s worm gears are made of wear resistant bronze and are up to 40% larger than our standard versions. Along with the larger worm gears are larger bearings anode jacks use only heat-treated alloy steel worms.

High temperature grease is used. Heavy duty sealing is very important on the anode jack to prevent ingress of the alumina dust due to its very abrasive nature.

As well as new jacking systems, Duff Norton Australia
offers retrofit or repair of all existing anode jacks, screw jacks and
actuators in the field whatever the origin.